There’s always something new going on at Capitan Middle School! Here’s where you’ll find out about all the latest Tiger news—important notifications, helpful articles, and upcoming event details. Be sure to check back often; we’ll be updating regularly.

Are your kids spending too much time playing mindless computer games? Encourage them to use their minds and write their own computer games instead. Of course, they probably won’t be cranking out a competitor to “Angry Birds” right away, but that doesn’t mean kids won’t love to write programs. Just because they can’t play basketball like Michael Jordon doesn’t stop them from loving to play basketball. Computer programming is powerful and fun, and kids don’t need to become professional programmers to learn from the activity. Computer programming teaches kids problem solving, logical (computational) thinking, and determination, and it fosters creativity. The best part is you don’t have to know anything about computer programming to get your kids started. You simply head to the Internet for the software of your choice.

Scratch
Scratch (a programming language developed at the Massachusetts Institute of Technology and supported by the National Science Foundation) is a free, fun, visual, programming language for kids from third grade on up. They can create games, interactive stories, animations, music, and art. They simply drag and drop the code blocks onto the programming area, and then they can instantly see the result. The different commands snap together. This avoids all the frustrating syntax errors of typing computer code while keeping all the mind expanding experiences of computer programming. You can view this short video to see what Scratch can do.

Kodu
Kodu (sponsored by Microsoft Research FuseLabs) is another free visual programming language for kids. It has a very specific video game focus. Kids begin with their own story and develop the characters, worlds, and actions to tell their story as a video game. In Kodu, the programming code is icon based. Kodu, which is Windows based, also has an Xbox 360 version available for a fee of 400 Points (about $5).

Ladybug Mazes
Ladybug Mazes (part of a Utah State University collection of interactive math manipulatives) introduces the concept of computer programming to kids as young as kindergarten. Kids make a plan for the ladybug to follow by choosing step blocks and turn blocks, which appear at the bottom of the screen. When they click the play button, the ladybug follows the command blocks they have chosen. Most kindergarteners need help getting started, but they generally catch on quickly.  Kids can play Ladybug Mazes online for free.

Programming software designed for kids is a great way to move your student from game player to game designer, from consumer to producer. Try one today; you will be glad you did.

Home of the Tigers

Check out these great links for more information on activities in and around Capitan. 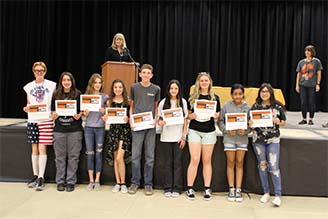